"Closure" is one of 24 new paintings featured in Gordon MacDonald's "Atmosphere" exhibition, currently showing at Argyle Fine Art.  A recent social media post by the artist drew our attention to this work in particular: 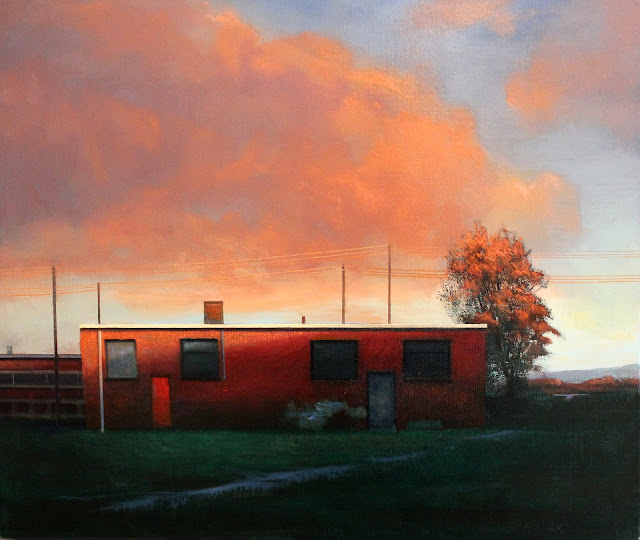 "I pass by this building on my way to a grocery store.  It’s in an awkward place and doesn’t seem to connect with anything around it.  It has a tattoo shop and a sketchy mattress outlet.  Fifteen years ago, I used to buy copper sheets from a door around the side.  It has a half exposed railroad track beside it and reminds me of the street car tracks that get discovered during roadwork.

I don’t know its past and it may have been a warehouse for produce or something.  It feels like it’s an architectural “hand me down” that was only ever used for its function, without any need or effort to be noticed by the public.

There is one tree on the side that faces a vacant lot that, although it’s fenced off, I trespass to get a view of open sky in the city..."

"..I thought what if I could venerate this to an icon?

What if, like 15th century icons, I use background to imply something else, otherworldly light, direct point of view...

It’s just a building I pass".

Gordon MacDonald, on his painting "Closure" from The "Atmosphere" exhibition, 2019 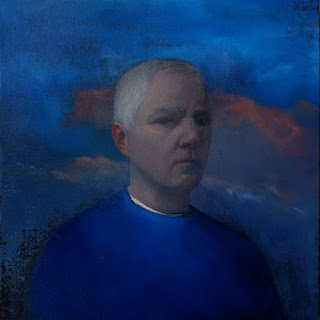 We asked Gordon about his inspiration for this piece, and he referred us to a self-portrait he painted entitled "The 56".

At first glance it's unclear what the immediate connection would be.  The colour palette offers some insight, the brushwork and certain compositional elements are also similar.

Subtle as it may be, Gordon tells us, it was the white of the subjects shirt collar that inspired the painting of "Closure". 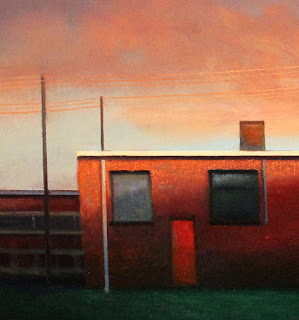 Upon closer inspection, a similar white line can be seen bordering the roof of the building.

It was something about the collar's hard edge, and the tonal values of the self-portrait that Gordon also saw in the building, and its immediate surroundings.

There's a certain "atmosphere" that exists in both paintings.

For Gordon it evokes a sensation that he would describe as his "Ah Ha!" moment.  The perfect combination of elements, (that when you see it), takes your breath away.

It's the thing that motivates an artist to paint and to create art.  For Gordon the "Ah Ha!" moment represents the driving force of his studio practice, re-creating that which he experiences in nature.

Gordon's statement suggests treating the building as a sort of icon, much in the same way one might experience a portrait.  Creating something extraordinary out of the ordinary.

"Closure" is currently available for purchase, and can be seen along with other new works in Gordon's current exhibition "Atmosphere" until August 6th.
Posted by Adriana at 5:04 PM