"Every year we travel to Ottawa to visit my family. My mother collects all the outfits my nieces have grown out of and keeps them for my daughter, Brigid. Often there are cute little dresses in a shopping bag. Mom may have purchased them or they were handed down from friends or family. This is a typical grandmotherly thing my mother does for my daughter.

I decided to paint a few of them because quite honestly as cute as they are, they never fit my daughter for long. These are the dresses I decided to begin the series with. I was drawn to the variety of fabrics and the textures and colours. I decided I wanted to paint them as though they were floating because I wanted them to have an air of mystery and whimsy."

Kim Floyd, "Grandma's Collection of Hand-Me-Down Dresses" Series, acrylic on board, 16" x 12" (each)

From Both Sides Now

"I kept my wedding gown...I had the idea to paint the dress front and back because my panel was square and I thought it might be and interesting choice compositionally. This led me to think of it more as a symbolic choice as well. I see marriage differently than I did in my twenties. I see its value but from a less innocent perspective. You grow together, through ups and downs, in some cases raise children, and get to know each other in different parts of your lives. I now see it from front to back and over time I may have and even more deepened understanding of what it means to be married. I have been married to my husband, Duncan for 22 years as of August 2019.
I loved painting the silk of this dress. The warmth of the ivory colour with the rum pink beaded band was what I found lovely when I bought the dress. It was simple yet elegant. I found it in the basement sale rack at Winchester’s here in Halifax in 1997. Including the gown in my collection of dress paintings, is meaningful to me." 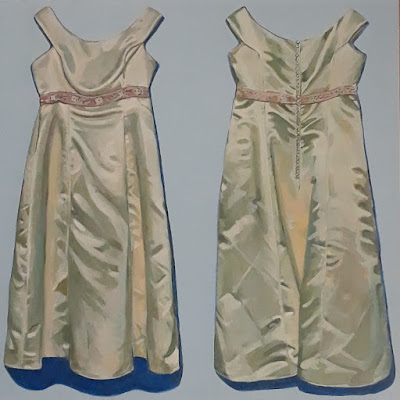 "Sarah Gartshore is an opera singer currently living in Illinois. Originally from Sault Saint Marie, Sarah attended the same high school in Ottawa as me where she could study music for voice. We became friends very easily and I was in awe of her beautiful talent and the sound of her singing could move me to tears.

Through social media, we have been keeping in touch for quite a few years now. I will occasionally hear her sing on YouTube while I work in the studio. 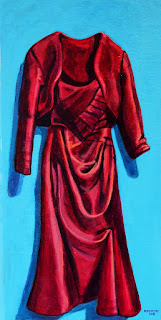 A few year’s ago, Sarah was diagnosed with breast cancer. She is a mother of two young children, and I was heart broken for her.

Sarah shared her news with everyone publicly and decided to fight her battle head on. I think everyone who knows Sarah was supportive and knew she would fight it.

I asked Sarah if I could paint the gown she wore her first evening back at the opera and she agreed. She offered me two dresses, one for that first night back on the concert stage which I have titled “Battle Gown” (Shown above). “Battle Gown” is a metallic coloured dress and though it is coincidental I like to think of it as a suit of armour symbolizing her strength and its delicate lacework as a symbol of her beauty, grace and talent. The other gown is entitled “Verdi’s Requiem” (Shown Right). This lovely gown was worn during a performance of “Verdi’s Requiem” after her fight was over. “Verdi’s Requiem” was also the last opera she performed before her diagnosis."

"Robin Thompson’s mom saved a little dress for her. It wasn’t her dress at first, it was her older sister’s aged one and a half, who wore it to the hospital when Robin was born. Robin saved it for her two daughters. Both her daughters Allie and Ella wore the same yellow gingham dress at age one and a half." 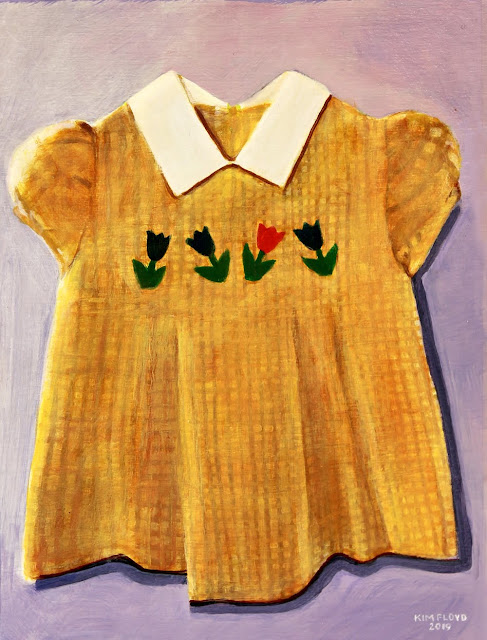 For purchase inquiries contact the gallery at (902) 425-9456 or via email at gallery@argylefa.com

You can also view the complete "Kimz*Met" exhibition online HERE