The Art of Environmental Sustainability


Last October artist Briana Corr Scott made the journey she'd been attempting for months - she arrived on Sable Island. To Briana this trip was more than just an opportunity to explore the small sliver of an island off of Nova Scotia, it was fodder for her soul.


For Briana this trip was a lifetime in the making. She began writing and illustrating her own books as a young child, and with the support and encouragement of her parents, studied painting and illustration at MassART in Boston. When weather cancelled Briana's first attempted trip to Sable Island she channeled her disappointment into writing about what she thought the island would be like. Those writings evolved, and Briana will be releasing an illustrated children's book (that includes a paper doll), "She Dreams of Sable Island", with local publisher Nimbus in May of 2019.


Sable Island was everything Briana hoped it would be, and of course so much more. Getting to
explore a space that so few people get to see in the middle of the ocean was a very special moment in time. The work that evolved from this trip culminated in her show, "Pieces of Sable Island", which is currently on at the gallery, and showcases Briana's perspectives and memories of the island. 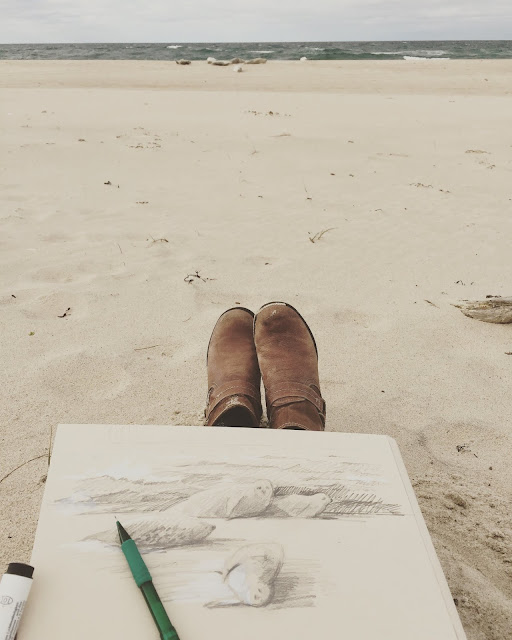 It's the conservation efforts of the scientists and park rangers on the island to preserve it that has allowed it to continue to be a special piece of Nova Scotia folklore for so long. Another show that touches on conservation is artist Michelle St Onge's new body of work, "The grass is grown, the flowers ris, I wonder where the birdies is?", is a beautiful series of watercolour nests that reflects the impact of clear cutting forests.


One "nest" that stands out in particular is the "ring" created by the bowerbird, known for their unique courtship practice. The male bowerbird builds it's ring, then begins to gather brightly coloured objects, particularly blue and green objects, to attract a female mate.


Unfortuately, this can also include brightly coloured plastic objects like straws and bottle caps. It's works like this that invite us in and gently remind us that this planet is not ours alone, and we have to be cautious of what we're putting out into the environment. 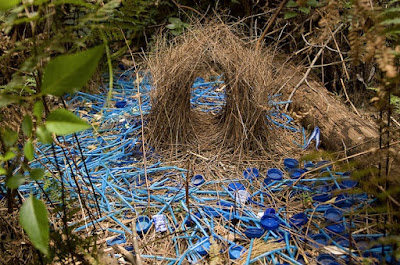 Both shows are up now at the gallery and are a must to see in person. If you can't though, you can view them both online at the links below:

Michelle St Onge, The grass is grown, the flowers ris, I wonder where the birdies is?, click HERE