Under the Influence (of you, and you, and YOU!)

Today is the last official day of our current group show "Under the Influence". We absolutely loved having such an eclectic mix of work in the gallery, and not surprisingly, the show was well-received and enjoyed by many visitors. Because the work in this show is so fantastic, we've decided to continue showing it for a few more days, so if you haven't made it out to see it, you're in luck!

Some of the artists in this show created works that were inspired by artists that are iconic, widely-known figures such as Andy Warhol or Claude Monet, while some were inspired by lesser-known artists that we hadn't heard of before. It's been a lot of fun to look up some of the unfamiliar names to catch a glimpse of the source inspiration.

One of the artists in the show, Jana Wicha, a recent NSCAD grad, has five large pieces in the show made of MDF that have been carved and painted. Her work has a big, bold presence in the gallery; four of the pieces depict discarded and crumpled-up beer cans, and a fifth is a trio of cigarettes in various stages of use.

Her work is inspired by an artist by the name of Sean Starwars, a printmaker based in Mississippi. He specializes in woodcut printmaking, and also paints directly on his woodcarvings to create finished pieces. Starwars is a key member of an international collective of printmakers called the "Outlaw Printmakers" who share a similar approach and perspective, much of which is inspired by Richard Mock. Mock was a printmaker, painter, sculptor, and editorial cartoonist whose work was published in the New York Times in the '80s and '90s.

Jasper Richard is another artist in the "Under the Influence" show who was inspired by an artist we weren't familiar with: Louis Wain. Jasper's piece in the show, "Cat's Birthday", is a brightly colored acrylic painting that features a highly animated cat hovering over a birthday cake loaded with candles. The colors Jasper employs in this painting are cheerful and fantastical, but there is a subtle sense of chaos and over-stimulation that seems to lurk in the repeated patterns and imagery. 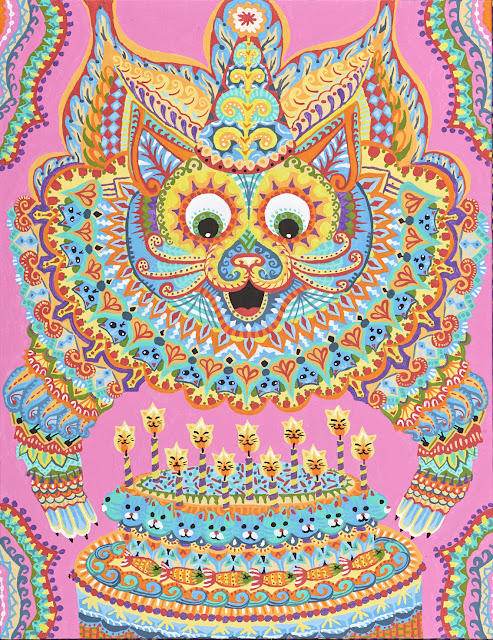 It was super interesting to dive down the rabbit hole of reading about Jasper's influence, Louis Wain. Wain (5 August 1860 – 4 July 1939) was an English artist known for his illustrations of animals and country scenes. He most known for his anthropomorphized cats with large eyes. Wain worked for many years as a freelance illustrator, and had his work regularly published in journals throughout England.

Later in his art career Wain began to experience some psychological difficulty, and was eventually treated for Schizophrenia (although the accuracy of this diagnosis of his debated). Throughout the his later years and amid his struggles with mental health, the style of Wain's work shifted significantly. The work he produced during this time is notably more abstract than his previous works, and seems to mark a period of exploration and evolution of his personal style, and his identity as an artist.

Hope everyone enjoys a fantastic long weekend, and be sure to stop by next week to catch the tail end of this show if you haven't seen it yet!