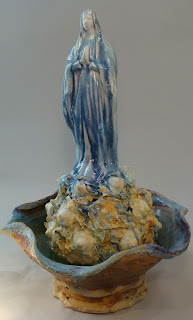 This is the continuation of the HOLIDAY HIGHLIGHTS we have been featuring throughout the month. This  work is by ceramic artist Mary Jane Lundy. Many of you may not recognize this work as a piece by MJ as she is usually known for her whimsical fish shacks and Giant Birds.....This is a beautiful work that just arrived at the gallery just before our Christmas party only a little over a week ago....we hope you enjoy it. It is looking for a wonderful home for the holidays. Here is a bit of what Mary Jane had to say about the work:

Our Lady is an image I grew up with as a child, my brother had found her in the dump she was part of grotto of the Lady of Fatima water fountain.  The fountain broke but my mom kempt the Mary figure and I cast a mold from her.  The Mary image from the Sacred Sea, came from my grandmother the cast aways that nobody else wanted after she past away, I always felt she was there just waiting for me, again I made a mold of her.I tell people I'm a Mary collector I love the many images you can fine of her from tiny 2 inch plastic Mary one I have of her that would of stuck on a car dash, to the 20 inch Mary I have in my Kitchen that looks over us while we eat, to the 4 ft Mary I restored for Our Lady of Mount Carmel Parish St. Joseph in Shad Bay the church that I attend every Sunday.

I believe in prayer and especially the Rosary and the powers it holds in healing and aiding all who call on her to help.Some people call creating Marys the art form Kitchie because of its replicas you find, thus making it  I feel a collectors item.  I grew up as Catholic Christian, Mary has always been there but it wasn't until I was in my thirtys did I begin to truly connect with her.

Next in the holiday highlight series is another favorite, Shelley Mitchell.
Mitchell is often recognized for her stunning portraits of dory's floating in water, and her ability to capture the reaction of these and other objects in water. This past season her focus has been the landscape found near and around her studio in Lunenberg, Nova Scotia which culminated in her solo exhibition titled
"All Around Us"
Black Spruce is one of many impressive examples in this body of work.
Shelly Speaks about the painting:
“Many years ago when my British cousins first came to visit Nova Scotia the thing they were most amazed by was the vast extent of untouched forest they drove through to get to the city from the airport! I was taken aback by this as I took our huge woodlands very much for granted but their observation has stuck with me over the years and made me look very closely at the trees. The casual glance sees them as a solid mass, much as a large crowd of people can appear. On closer observation the trees, like the people, emerge as unique and individual. Every tree in our vast forest is worth a second look. Once in a while you notice an exceptionally fine specimen such as the one I've painted in "Black Spruce". This particular tree stands alone between the road I travel and the water of Martin's Inlet in Lunenburg County and in spite of direct exposure to storms and winter winds has grown tall and straight and become, for me, a dignified and lovely example of the singular beauty many trees can attain. Although the Black Spruce is a very common species of tree and often considered to be "scrub" I wanted to express how shapely, graceful and truly elegant they are. Like all my tree paintings, this one is anthropomorphic in that it is meant to embody human traits and the human condition in the form of a tree and describe how sublime a common tree, like a common person, can be." Shelley Mitchell
Posted by Adriana at 4:54 PM

Next up is Gordon MacDonald and his magnificent sky's. Working at the gallery we hear time and time again, how Gordon is able to perfectly capture the emotion and beauty of our local landscape. Adrianna and I thought this painting of Lawrencetown beach was a fitting example of Gordon's work, since it's a familiar spot for many of us and a great source of pride for those who call this area home.

I know what you're thinking... wow eh? Local photographer Steven Richard's recent solo show "Cloud Bursting" made a big impact on our regular gallery goers. These limited edition photographs capture what seem like impossible moments of beauty. Are they flying? Are they underwater? Nope!
Through the magic of photography and lighting, Steven Richard captures a group of female dancers saturated in flour, and turns them into stunning otherworldly beings.
Steven Speaks about his work in this video taken at the gallery:

HOLIDAY HIGHLIGHTS : Steven Rhude with "Lighthouse on a Road"

We're Starting our highlight series with a big one... A painting from Steven Rhude's  most recent exhibition Declared Surplus


Rhude is quickly becoming one of this provinces most recognized artists, and is even slated to release his first book on December 10th titled "A Place Called Away".  Drop by the gallery at 2pm and pick up one of the first signed copies and meet the artist!

Wondering WHY the lighthouse is in the middle of the road? Read on!


My interest in lighthouses as subject material was sparked by the soaring shapes and modernist qualities of their design. For years they have been a metaphor for the exuberance of the marine/fishing age. Declaring lighthouses surplus has set into motion a figurative journey not only for our region but our collective identity as well. A journey existential and without destination. This is a changing landscape we are now in – busy trying to transform the once nautically essential structure into a heritage site in order to retain some semblance of collective memory for the Atlantic coastal community. A memory which once not only spoke to the past, but through these structures looked confidently to the future. Unlike the soulless technology of the steel skeleton lighthouse of today’s vintage. This painting mirrors the monument to the lighthouse, juxtaposed with the new era of the information highway. It has evolved over the years as I have staged a number of maritime objects like buoys, fish boxes, boats, and sheds on the road, metaphorically impeding the viewers path in order to establish a negation of movement. A duality is then established in a place normally used for transit.
The regionalist painter has lingered in the shadow of the contemporary agenda. In an ever increasing yet nebulous world of postmodernism, where art practitioners working in film, video, installation etc., produce work which has a homogeneous trademark; rendering the artists place of origin meaningless – Tokyo or Winnipeg, it does not seem to make a difference where technology is concerned, as it dominates over content, the spectacle over philosophy, the curatorial high priest over the poet.
Lighthouse on a Road, indeed most of my work is an attempt to assess that shadow and its origin, while considering the poetics of place as it relates to my particular region of the world
Posted by Adriana at 1:42 PM

Leading into these busy days of the holiday season, the girls at Argyle Fine Art would like to remind you of the strength of our our arts community, and the importance of supporting local talents. Stop by our blog for the next few weeks while we feature some of our most treasured Art pieces now available at the gallery, and ask the artists to give insight on their featured artworks. For more infomation on each individual artist, swing by the gallery on 1869 Lower Water Street, or peruse our website www.argylefa.com 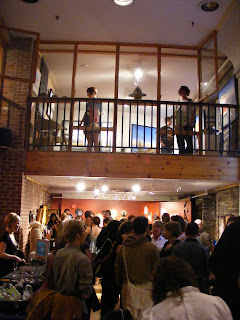