Tonight at Argyle Fine Art we're kicking off Halifax Talks Art with our talk "Take a chance on me: Discovering and supporting emerging artists", from 6-8:30PM. This talk is the first in a series put on by local Halifax galleries including Zwicker's, Studio 21, Secord Gallery and Argyle Fine Art. 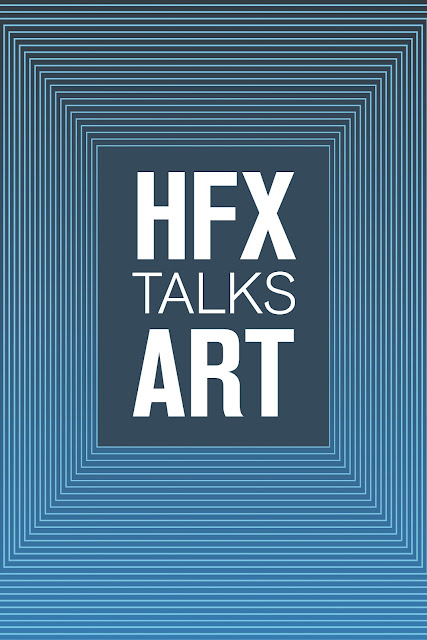 We'll also have Tidehouse Brewing on hand for a little tasting at the talk. 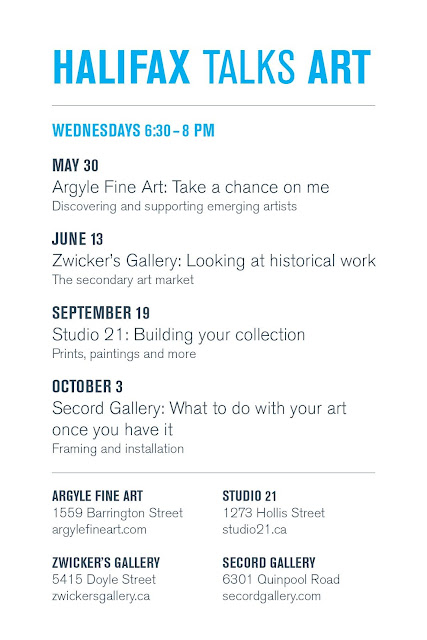 A Splash of Citrus with George Spencer

Spencer currently has a featured body of work on at the gallery that showcases citrus in all it's wonderful stages and forms for admiration and consumption. See the entire show by clicking HERE.


But first, a little history... Citrus cultivation began in Asia over 2500 years ago and references of lemons in art began popping up in China during the late Ming Dynasty. After that citrus fruit spread into the Middle East and the Mediterranean, and their representation in art has been a mainstay ever since. Wallpaintings of lemon trees were even found in the buried houses of Pompeii in Ancient Rome.


In the 1600's the lushness of citrus fruit in art comes to fruition, with the masters of still life, the Flemish painters. They used citrus fruit as a representation of opulence and wealth in their works.


In the 19th and 20th century as still life painting evolved, artists like Cezanne and Frida Kahlo painted still lifes of citrus fruit that made the subject of their works feel alive and intimate, almost as though they were painting portraits.

Today citrus fruit is a main stay in western culture. Once considered exotic, citrus fruit was a special treat you'd get around the Christmas holidays.


Nowadays orange juice is mainstay at the breakfast table and lemon meringue and key lime pie are diner staples.


So many of the qualities mentioned above artist George Spencer is able to evoke in his work. His pieces feature the lushness of the Dutch painters, along with the vibrancy and intimacy of the French impressionists.


Not only that, but Spencer captures the contemporary side of citrus fruit. Honestly can you imagine having a gin and tonic out on a patio without a splash of lime? I think not.


Or a cup of tea without a side of lemon? Good heavens no.


Stop by today to see Spencer's citrus feature, they're a real treat for the eyes (and the stomach)!

Art on the Go Workshops are back!

It's that time of the year again to start up our fun and very popular ART ON THE GO workshop  series with a few great art talks thrown in for good measure! These workshops are 2- 3 hours long, affordable, all supplies are included and are great for all ages and experience levels.

Last year we started this series, with the idea that it's fun to learn new art things in the summer but it's even better to do that outside at local places and spaces in our neighbourhood. We created small palette and paint boxes for all the attendees -with the help of Sievert's Limited next door to supply the wooden cigar boxes and we headed to the beach, a farm and more . This year we have lots more fun and creative destinations in store for you! 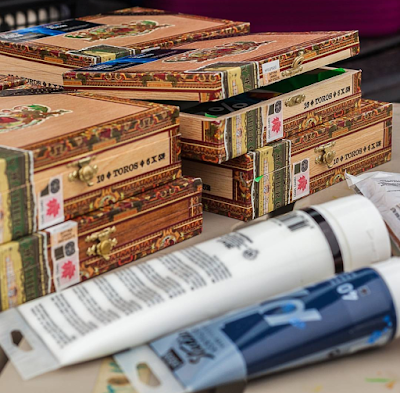 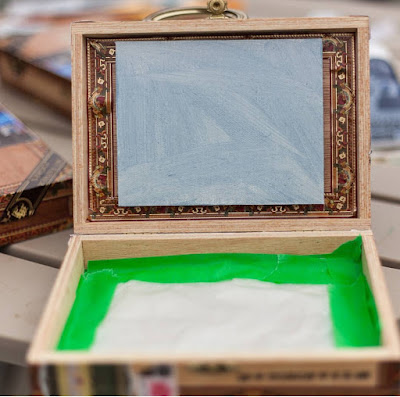 Within the months of June thru August, we are going to head to a diner for some doodling, to a brewery, to a bakery, to the park and more! Check out our WORKSHOP page on this blog soon, for details on workshops lead by Melissa Townsend, Mark Brennan, Allison Irish, Gordon MacDonald, Jan Davison and others.

We're starting off our workshop series with COLOUR POP on Wednesday, June 13th, 5pm-7pm. All supplies are included as well as a treat from the The Old Apothecary Bakery- and the cost is just $50 per person. Limited class size of 10.

Learn how to make bright colours POP by mixing neutrals! Join us at The Old Apothocary with artist Caitlin McGuire to paint their vibrant interior, while learning how to balance bright colours with the neutral colours in their space. Call 902-425-9456 or email (gallery@argylefa.com) to register today! 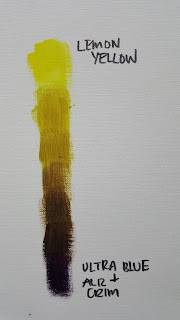 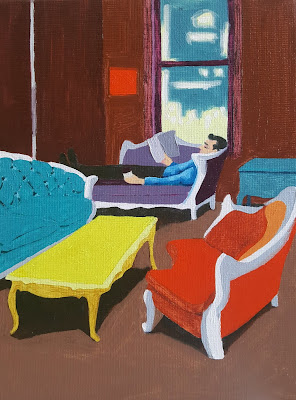 We are also hosting TWO free interesting talks coming up soon! The first is part of a series that some of the commercial galleries are presenting together called  Halifax Talks ART. We picked our topic to discuss of Emerging Art as it's one of our most favourite things to discover and to foster new talents. We'll have a few emerging artists on hand to talk about their experiences as well. 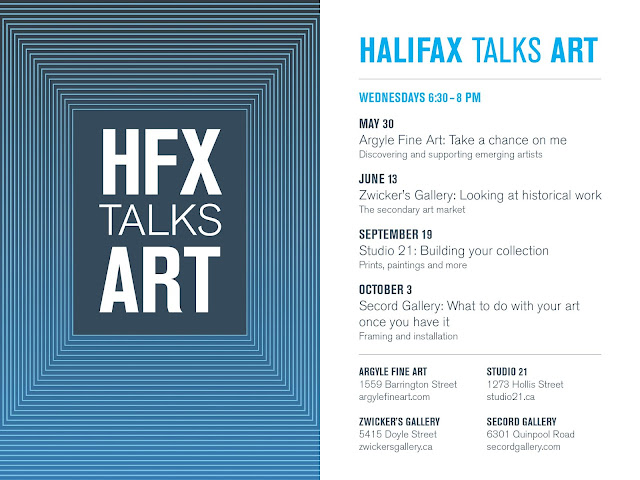 The other art talk will take place in support of a solo show of paintings by Briana Corr-Scott, which is all about her trip to Sable Island and how it's inspired her to paint, illustrate and write all about it. We'll also be joined by a scientist that lives and works at Sable Island too, that can answer any questions about the island and it's habitat itself. The talk will happen at the gallery on Wednesday, June 20th, 6pm-8pm. 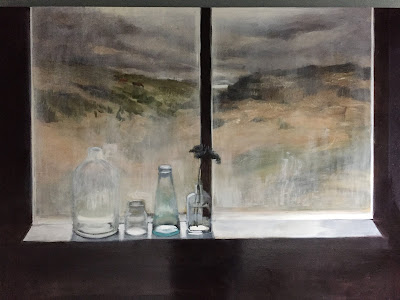 A Royal Proclamation: Until the end of day Saturday May 26th our gallery artist prints are on sale for just $10 each! They're signed and editioned by the artists, normally priced at $25, and you know it doesn't get much better than that. So gift yourself, orrrrr, they make a great (and inexpensive) wedding gift. Sized at 8.5"x11" you can pop them into a frame and there you go! 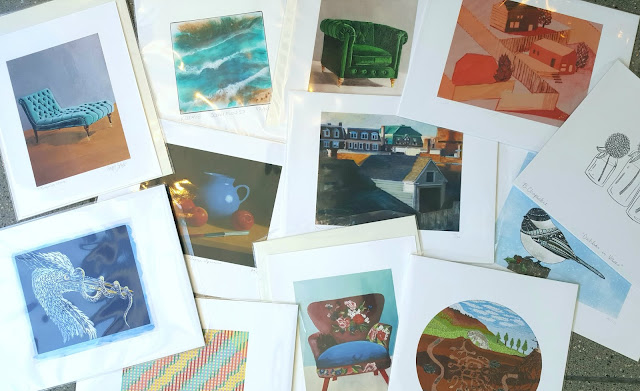 We had a bit of fun pairing pieces together, so here's just  a few of the prints that are on sale right now...


Speaking of weddings... It's the Royal Wedding weekend! And not just that, it's the Bluenose Marathon weekend! Congrats to everyone participating in both events.We decided to celebrate the best of both in our window display... 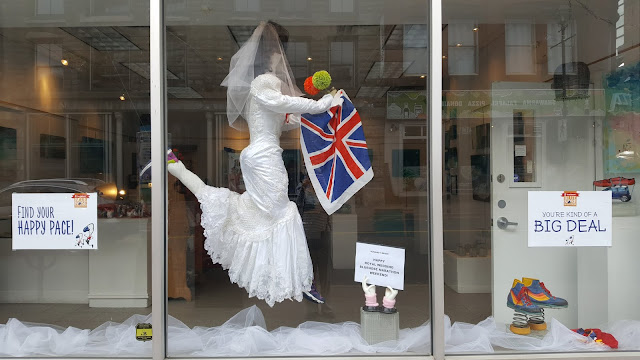 And from our own royal couple, Edward the VII and Glissandra, we hope you have a wonderful weekend! 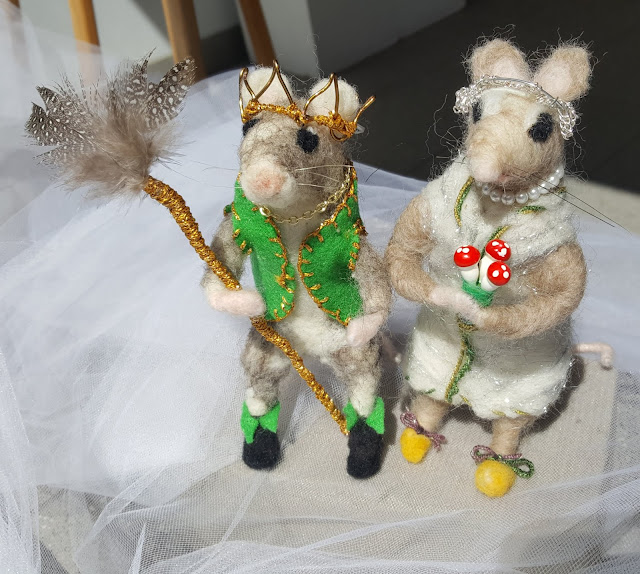 Pop in to meet this adorable couple by artist Dorothyanne Brown and some of their fabulously felted friends!
Posted by Argyle Fine Art at 4:53 PM

Today is Mother's Day...a day to remember and  thank someone that has helped you through the good times and the bad. It could be your actual mom or a special mother figure. It's time to celebrate great women in your life! It's hard to sum it up- but Caitlin McGuire; who works at the gallery, shared a comic she drew a few years ago to express what her mom means to her that may resonate with many of us too. 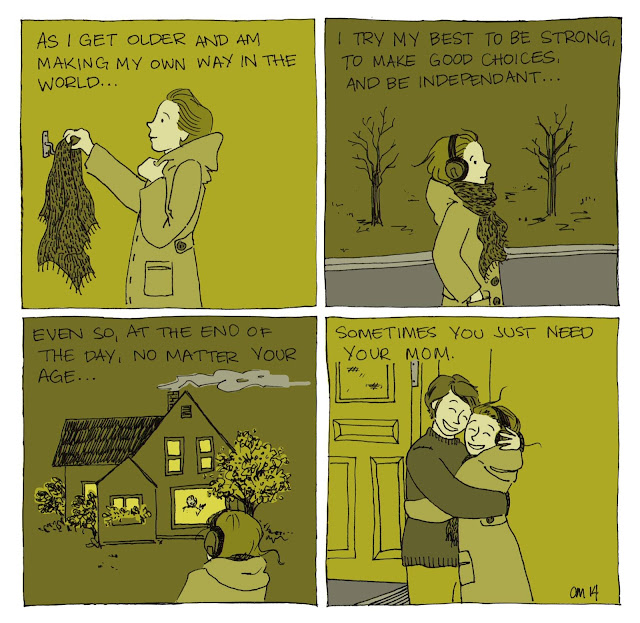 We asked our customers and artists to share some special pictures of their moms ..so in no particular order, here they are. HAPPY MOTHER'S DAY TO ALL! 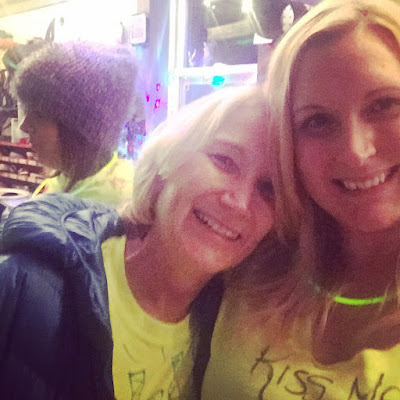 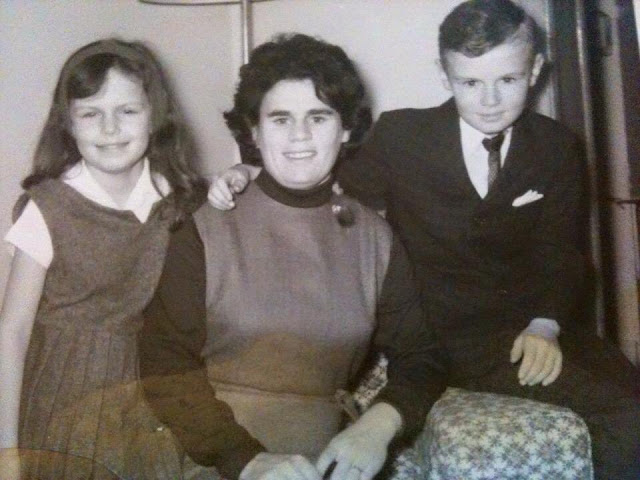 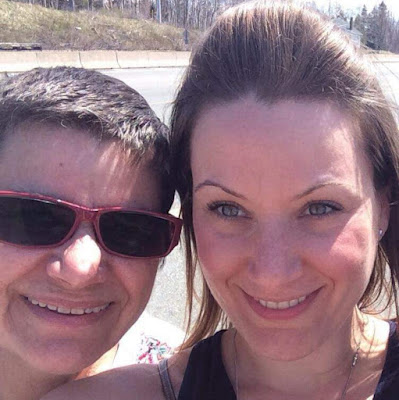 Look at all these moms!  Do you see you and your mom? We are so thankful that you shared your pictures with us! Don't forget we'll have a thank you gift for you at the gallery next time you're by...the secret phrase is MUM's the WORD! :-) 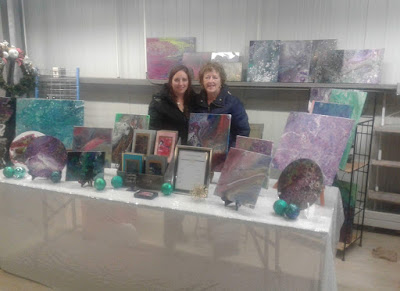 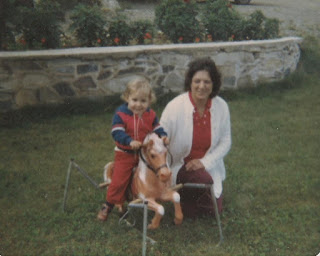 Have a great time with one another- time is precious. Hug a mom today!
Posted by Adriana at 6:30 PM

Dive In: Kimberley Eddy in the Studio & At the Gallery this Friday

We're getting excited to share the latest paintings by Kimberley Eddy! If you've been pining for warmer weather, these works are sure to boost your Spring/Summer spirits! Kim has used a variety of mixed mediums including art resin, acrylic paint, ink, sand from as far away as Bermuda and ONE painting actually lights up! 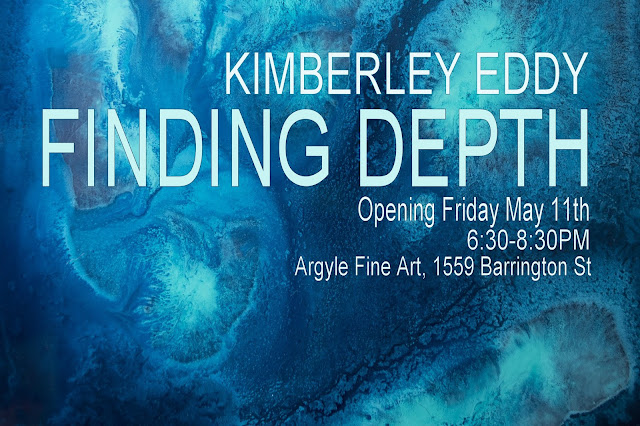 A few weeks ago we had the great pleasure of visiting Kimberley at her studio to see how these works are brought to life. For starters we were drawn to all the various acrylic paint, inks, alcohols, brushes and resin...and impressed with how organized she is. With this type of art, being organized certainly helps. It's 70% art making and creative problem solving,  but 30% science and technical painting too that requires things to be in order for a piece to work the way the artist wants, instead of leaving everything up to chance. 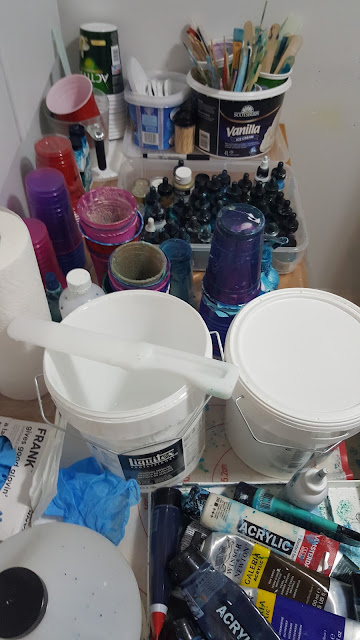 We also loved to learn about her obsession with the beach and sand. Kimberley has an extensive sand collection stored safely away in carefully labeled mason jars. The sand makes it's way in to her art. You'll find some sand from Bermuda as well local Nova Scotia beaches in her latest paintings on display. 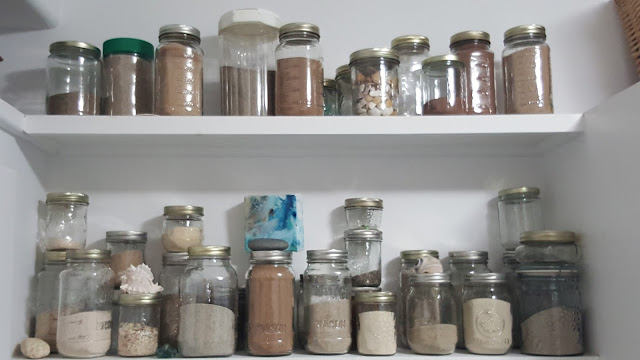 Kimberley showed us a few works in progress and even got out the torch to show us how she creates the smooth and shiney surfaces. WOW! It was amazing to see her at work and in her element. Safety first! Mask and gloves are an important part of the process too! 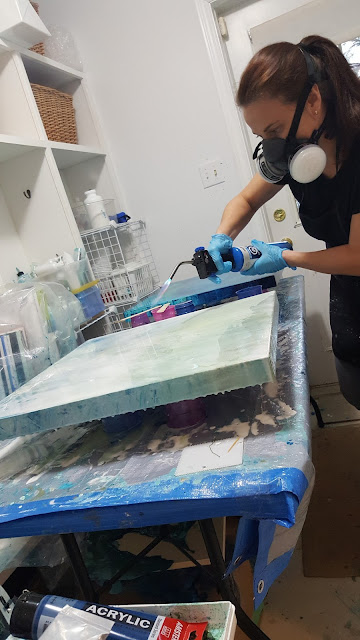 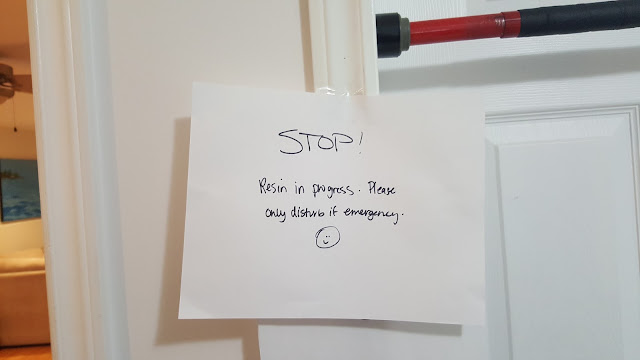 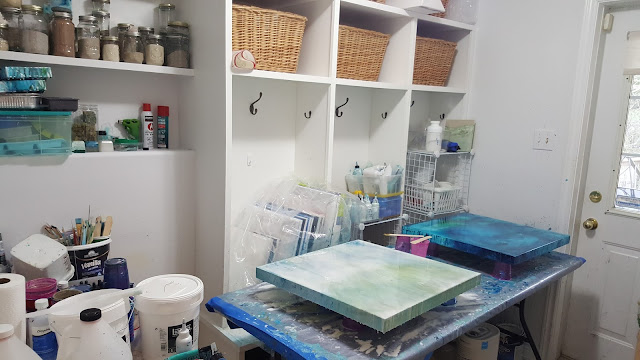 We can't wait for you all to meet Kimberley Eddy at the gallery this Friday, May 11th at the opening of her show, 6:30-8:30pm. But if you can't get here then, just drop by anytime since the show continues for a few weeks. All of the paintings will also be  online under our NOW SHOWING part of this blog too, once the show has officially opened. You may also have a chance to meet Kim here on Saturday afternoon...she hopes to pop by later in the afternoon. 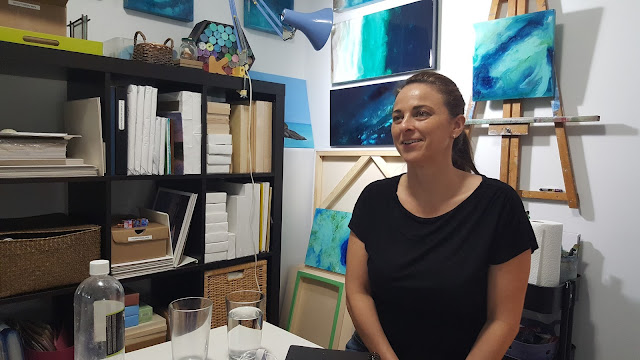 We are so thankful to work with so many talented and gracious artists like Kimberley. Please make an effort to support our artists and local businesses. Pick up something special for yourself, a graduate or maybe even your Mom...as it's Mother's Day this Sunday!  See you soon!