Ah, late August. You can just feel it in the air. The weather slowly starts to shift and back-to-school preparations begin. While neither of us at the gallery are going back-to-school per-say, we are in the spirit of back to school preparations to help the awesome folks at the Parker Street Food and Furniture Bank with their Back to School Supplies Program. Parker Street provides 800 backpacks with school supplies to families in need, and currently they only have 200 backpacks ready for September.

We know our gallery community is filled with people like you who like to help out, and we'd like to thank you for doing so! Right now at the gallery if you donate $20+ or bring in $20 worth of school supplies you'll receive **15% off your art purchase (**some exceptions apply). OR bring in lightly used or new backpack and be entered to win a $50 gift certificate for the gallery. Thank you to everyone who has donated so far! 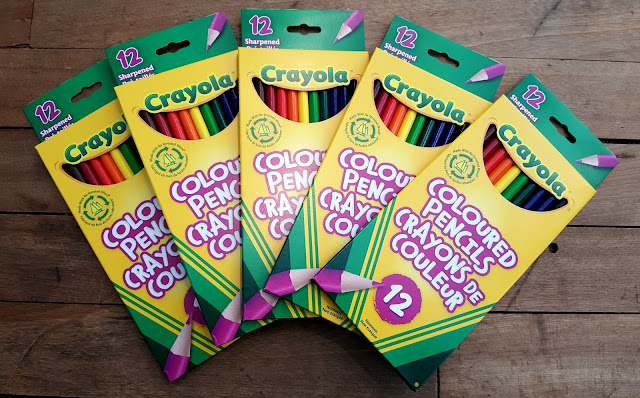 Now back to art business. This week we've received some great new work, like these pieces from George Spencer. These two paintings from George are a great way to extend the local strawberry season indefinitely!


Or for kicking back after you've dropped the kids off at school for the semester with a chilled glass of wine:


You can see more of George's work online here.

This new painting by Caitlin McGuire (yes, I am writing about myself in the third person) might be a familiar scene to those who have loved ones studying across Canada and abroad...


Can you place it? Or how about this one for folks who commute across the harbour for work and school?


Caitlin (yes, me) will have more pieces arriving later in the week, but in the meantime you can see more of her (my) work online here.

We also have a special 30% off work by Stuart Melanson, including these beautiful pieces that seem to beckon Fall and Spring at the same time...


Whether you're just getting back to town or are getting ready to head out again, we'd love to see you, so pop in and say, "Hi!", soon, would ya?

If there's anything you can say about artist Mark Brennan's connection to the rugged Canadian landscape it's that it's is a pure one. A naturalist in the truest sense, Mark's love and respect for Canada's deep woods and waterways comes through in every one of his paintings. His work doesn't just represent the wilderness he's engaging with but also embodies his experience with nature.


In addition to his paintings Mark also records sound when he's in the woods, creating a multi-sensory experience. And don't think that weather is a deterrent to Mark - he camps all year round, even setting up a special winter tent with a heater where he can submerge himself in nature and paint all year round.

Here Mark talks about his painting, Snow at First Light, which is a scene from Drysden Lake here in Pictou Co, Nova Scotia:


In the late winter I mostly stay close to home to paint on location. I had gone out to work one morning at a lake about 10km from my studio. The lake seems to run as part of a rough line where the topography changes and becomes mostly Boreal forest. This was what drew me, the Black Spruce swamp, the frozen lake and of course the first light of dawn.

Painting Snow At First Light was about capturing the most fleeting moment that morning, one that lasted perhaps a few minutes and then was gone forever. When I am alone in a place like this, at dawn, about to paint, I try to give myself to the work. I try to bring everything felt, heard or seen to this one focal point, this one birch panel to express a level of truth I had felt. I want to let the landscape flow into me and then out again in the form of a painting.

Mark also made his way to the Georgian Bay in Northern Ontario this past year:

In 2015 I decided on a late fall trip to Killarney Provincial Park on Georgian Bay, made famous by members of the Group Of Seven nearly a century ago. The park actually became protected because of the efforts of several of these iconic landscape painters.

The painting, Georgian Bay Shoreline, was inspired just after arriving at the edge of Georgian Bay on my last day; I was soon to be heading East towards Muskoka. I had only ever seen glimpses of the Great Lakes before, mostly from highways or while on a train trip across Canada in the 1990’s. Georgian Bay reminded me of my insignificance, everything about this place was vast, the lake, sky, the granite shoreline. I remember climbing down over the worn rocks peering into the depths of this great lake listening to the waves breaking with a deep sigh . The light at the forest edge pulled the fall colours from the shore Maples; they shone with an intensity I was to see later in places like Algonquin and Killbear Provincial Parks. This place deserved to be painted.

Both Georgian Bay Shoreline and Snow at First Light are up at the gallery right now along with other new work by Mark, like this stunning painting March Sunrise:

See more of Mark's work online here and the rest of the show at the gallery until August 31st.
Posted by Argyle Fine Art at 12:24 PM

Into the Wild, Inside the Gallery

The rain may dampen your camping plans this weekend, but with the fire ban on in Nova Scotia we desperately need it for our gardens and forests. But if the rain leaves your plans up in the air, fear not - we have the alternative!

This SATURDAY - hey that's TOMORROW - we have new work opening by artists Twila Robar-DeCoste and Mark Brennan! Both Twila and Mark have a deep connection and appreciation for local landscapes and wilderness, which is evident in both of their bodies of work.


Hike down to the gallery and you won't be disappointed, both Mark and Twila will be here from 1:30-3:30pm for you to chat with about the great outdoors.


We'll have trail mix for you to snack on, just to complete the experience.


In addition to Mark and Twila, gallery favourite and French knot expert, Yoko White, has also created a necklace which shows off the beauty of the great outdoors.

So hike down to the gallery this Saturday from 1:30-3:30pm to escape to the great outdoors, indoors, and to share your love of Nova Scotia's wilderness with Twila and Mark!
Posted by Argyle Fine Art at 2:49 PM

The flow of the ocean with Kimberley Eddy.

Serene and alluring, we're happy to bring you these new pieces by artist Kimberley Eddy from her two resin series' Ocean Flow and Water Dance.


Working between layers of resin with acrylic based paint and ink on canvas and birch board, it is near impossible to photograph the depth Eddy is able to achieve in her pieces.


The resin in Eddy's pieces creates an almost glass like surface.


For Eddy the pieces are inspired by the experience of flying over water.


Here Eddy talks about the work in her own words:

"The water is a constant source of inspiration for me. In these abstract pieces, fluidity and depth are shown from an aerial perspective in a watery palette. This work has a depth and detail to it that begs the onlooker to stay awhile and look deeper."


Here are some detail shots of the work so you can see all the wonderful colour and movement Eddy is able to achieve. 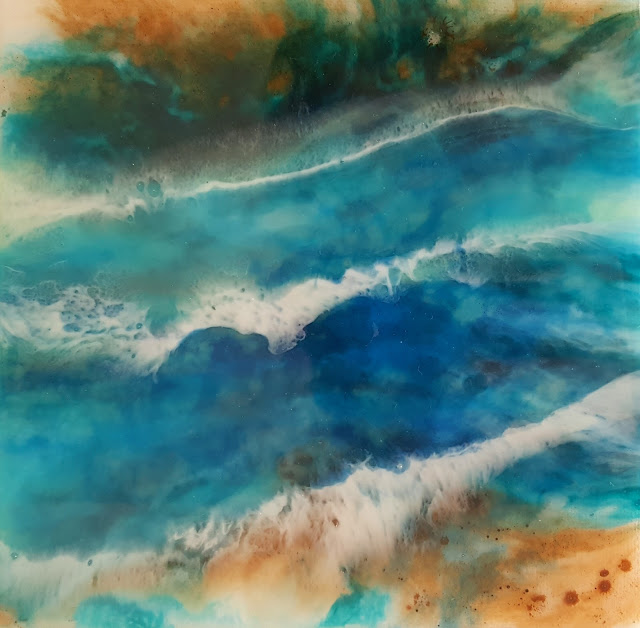 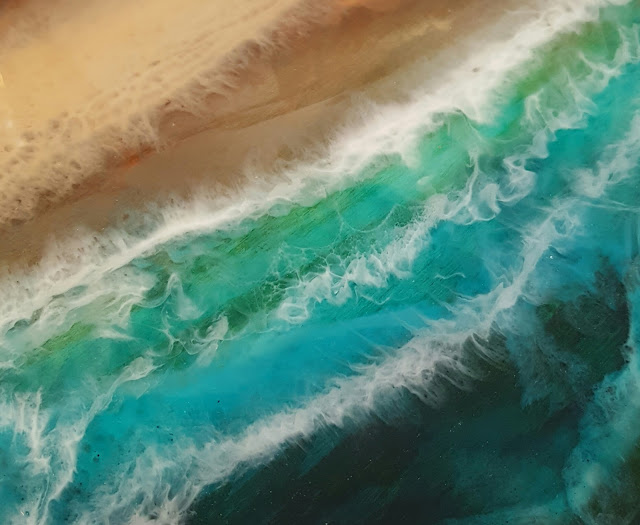 These pieces are really beautiful in person and you really can't see all the beautiful layers in photographs. We have a feeling they won't be around for too long...

The summer is in full swing now here in Nova Scotia. There's so many great things to discover in our province, so jump in your car and visit some art galleries and artistic colourful creative places all around us!

If you need some road trip inspiration, Andy MacDonald has got you covered with his most recent painting called "Impala Sunrise" and a glow in the dark painting too, called "Six Black Trucks", which he painted on a re-purposed vintage door still complete with hinges and handle. 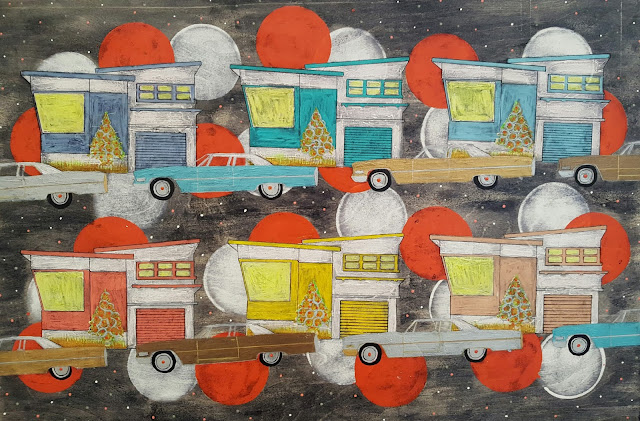