Every year, we are always impressed with the submissions for Pre-Shrunk and are reminded of how important shows like this are for artists to try new things!  It's not as easy to create a small piece as it may seem. Mary Jane Lundy is no stranger to Argyle Fine Art-many of you know her from her whimsical clay fish, birds and fountains .We were over the moon to see what she created for this year's show. It's not at all what you may have expected. 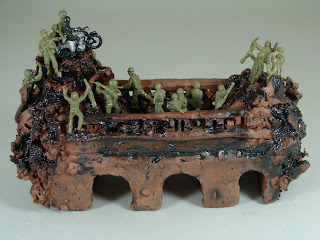 This work is called "Lest We Forget" . It is made mostly from clay, with plastic toy solidiers from the 1950's.  The words "Lest We Forget" form the refrain of "Recessional", by Rudyard Kipling. The phrase offers a warning about the perils of hubris and the inevitable decline of imperial power.The phrase later passed into common usage after World War I across the British Commonwealth especially,becoming linked with Remembrance Day observations; it came to be a plea not to forget past sacrifices, and was often found as the only wording on war memorials, or used as an epitaph.
Posted by Adriana at 1:36 PM