The Fruits of Christmas: New Works by George Spencer

Recently we received some new still life oil paintings by self-taught artist George Spencer. In fact just this Tuesday, we received one painting of an orange in particular which made us think of holidays from the past and the symbols and traditions associated with fruit.

George even told us that he remembers quite fondly about how exciting it would be to find a delicious exotic fruit...an orange at the bottom of his Christmas stocking when growing up. I remember this same tradition, which was passed down to our family from my parents and theirs before them. In fact, this is a very old tradition, dating back  to the turn of the last century, where good children would receive their only orange of the year as a Christmas gift. Do you still share in this tradition?

This painting is even more wonderful in person- you can almost feel the light spray of orange while in mid-peel and the fresh scent of citrus. 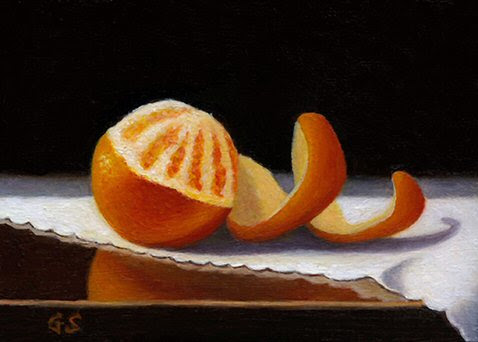 Even if you don't celebrate Christmas, you've probably heard of the popular tune, "The Twelve Days of Christmas" which speaks of many, many, many birds and some fruit....the most memorable being a pear tree...and hence pears!  Pears are popular in art historically and have great symbolism across cultures but are often seen as a symbol of "love of mankind" and in many parts of the world the pear symbolizes the human heart which it resembles. 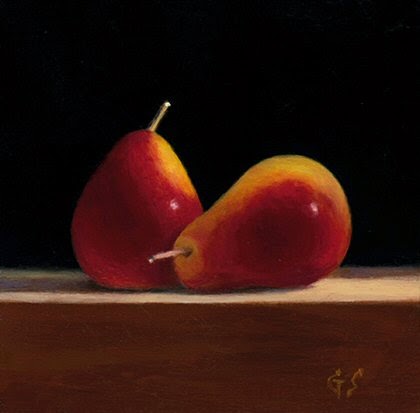 Over the holidays red berries are the stars of the season. Holly berries, and cranberries have filled our halls or  kitchens for centuries, but a more recent red fruit that has caught our  attention lately is the pomegranate; which  is still a relatively exotic fruit to many of us that seems to be associated with the  holidays. Indeed, it certainly comes well gift wrapped!  The pomegranate is thought to be one of the oldest cultivated fruits with first records dating it back to 100BC, when it was native to Persia.Ancient Egyptians were buried with wild pomegranates, which were symbols of rebirth.The English word ‘pomegranate’ is from Latin ‘pomum granatum’ which means ‘apple of many seeds.’ 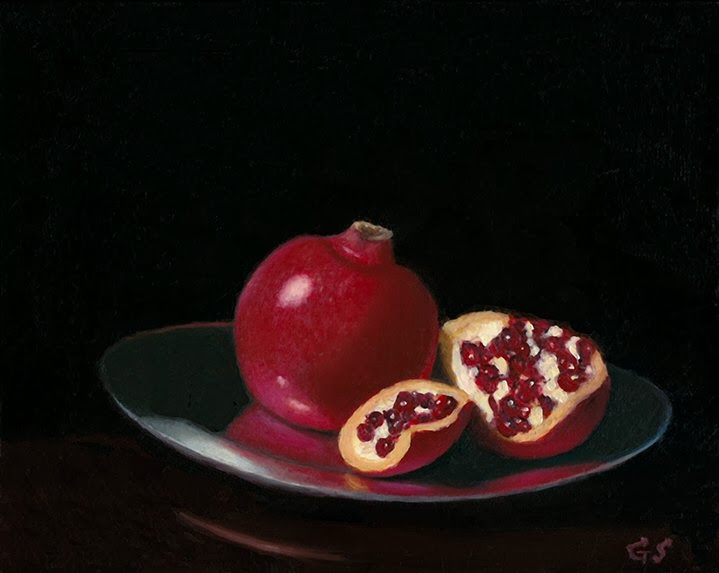 And finally, the tried and true apple...there with us throughout the year in all seasons, through thick and thin, which makes a delicious appearance this time of year, in the form of mulled apple cider that fills homes with it's  scent of apple, cinnamon and nutmeg.  This work below of the apple by George,  looks like the perfect Christmas gift; as if the recipient has just opened a luxuriously wrapped apple- with the green and red colours of the season. 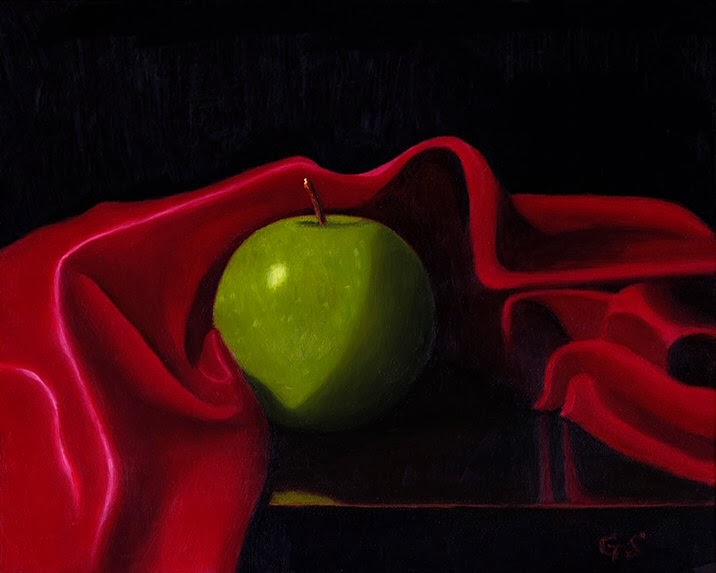 Drop by this Saturday at the gallery for some hot cider and see what this delicious tradition is all about and see these original works and more by George Spencer.