Join us on Thursday, September 10th from 6:30 to 9:00 for opening receptions highlighting two new exciting exhibitions; Brianne Williams's "Water and Wharfs" and Angela Carlsen's "Before Homogeneity"

It's been a few years since we've had the pleasure of hosting new work by Angela Carlsen, and so we're especially excited about this collection. She's been busy working on new techniques, and is now working with tarnished aluminum! The effect is incredible - you'll definitely want to see these in person. Have a looky-loo at some of her in studio shots, for a glimpse of what's to come: 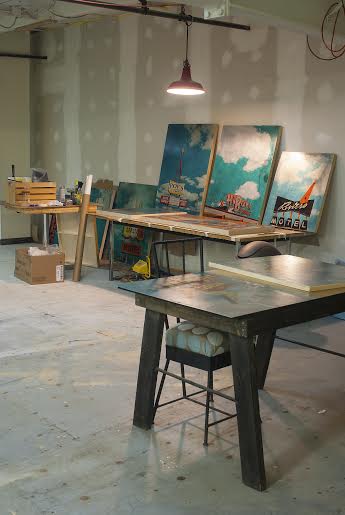 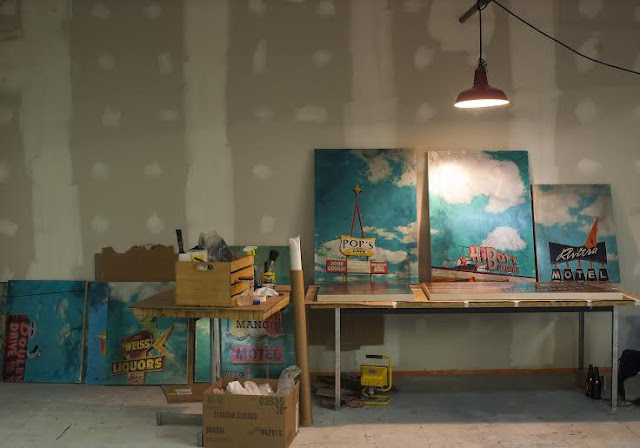 Angela speaks about her new show:
"I've titled the show "Before Homogeneity" which to me means, before there were major chains and big box stores where everything is predictable and looks the same, there were roadside signs vying for your business. Makes me think of people I know who drive to Florida every winter and stay at the same place and eat at the same place because they know what they are getting; they like the predictability of it all. Whereas, I choose the places I eat and sleep when on a road trip by the signs that lure me in, which are becoming harder and harder to find. And as you know, these big companies and interstate highways by-pass these places, making it near impossible for these places to continue to exist."
Posted by Adriana at 12:16 PM